2016 was an interesting ride for the markets. Investors have been conditioned to a certain way of thinking during the post-crisis period. Despite any perceived underlying causes, any measurable pullbacks in the stock market have been fleeting, and quickly followed by swift and powerful rallies. Moving aggressively to buy these pullbacks has been a strategy that has gone highly rewarded in recent years, and this year has proved no different.

For an extended stretch from 2012 to 2014, the stock market was impervious to any meaningful corrections at all. There were events to be sure; the post-election pullback in 2012, the so-called “taper tantrum” in May-June 2013 and the handful of days after Russia invaded Crimea in early 2014. Despite the disruptions, all of these corrections were relatively short, and none exceeded -10% on the S&P 500 Index. Of course, throughout this time the Federal Reserve was actively implementing its QE3 stimulus program, which was the most aggressive in terms of the size and duration of its asset purchases.

It was not until the very end of its QE3 program in late 2014 when we finally saw the U.S. stock market return to showing any sort of negative reaction. Since that time, we have seen four distinct pullbacks, with the final one hitting at the beginning of 2016. At the time, the People’s Bank of China was completing the measurable reduction of its balance sheet and the Chinese stock market was suffering its final downward leg from the short but epic bubble that had burst just a few months earlier. In the process, stocks lost -13% of their value in just three short weeks into January and revisited these lows a few weeks later in February.

But starting in late January and continuing into early February, the Federal Reserve once again began its market-propping doublespeak. Janet Yellen, who had declared just a few weeks earlier the Fed’s intention to raise interest rates as many as four times in 2016, began issuing reassuring comments that the Fed was backing off from this anticipated rate hike pace. Once the China stock market unwind had run its course and the market was sufficiently pacified that the Fed would not be acting on rates any time soon, it was off to the races again. By mid-April, stocks had once again quickly recovered all of their correction losses and the “buy the dip” traders were rewarded once again.

We have had four notable corrections over the past two plus years since the end of the Fed’s last QE3 stimulus program. And in each case, it was the vocal intervention of the U.S. Federal Reserve that saved the day and rewarded those who had the courage to step in and buy when the market was quickly spiraling to the downside.

Will The Fed Continue To Prop Up The Markets?

It has been roughly a year now since we have seen the last measurable correction in the U.S. stock market. We’ve seen a few pullbacks along the way, but these have either been lightning fast (post-Brexit) or have seemed more like consolidation (mid-August to early-November) than anything of note.

But a lot has changed both at the Fed and across Washington in the past year. The political climate has been roiled both in the U.S. and around the world by a dramatic shift toward more populist and nationalist policies as voters increasingly express their frustration over political elites that have failed to respond to the frustrations of their constituents. The actions of the Fed over the past few years have not been spared scrutiny either. Interventionist actions to support the stock market that might have been viewed as acceptable if not lauded this time a year ago are now being viewed with increasing cynicism and met with growing outside pressure given the ongoing negative consequences of these actions on the responsible savers for the benefit of the profligate risk takers – read Wall Street.

At the same time, the policy priorities of the soon-to-be new President of the United States may usher in an entirely new policy perspective at the Fed. To begin with, the team that is advising the president-elect on monetary policy has an extensive public record of being more hawkish and openly critical of the Fed and its policies during the post-crisis period. Moreover, we may see the complexion of the still relatively dovish Federal Reserve meaningfully transformed once the new administration is in office.

Why does all of this matter? Because the next time we see a measurable stock correction, the potentially more hawkish leadership at the U.S. Federal Reserve may not be so quick to rush out and reassure the markets the next time it is falling by -10% or more over the course of a handful of days or weeks. As a matter of fact, they may not have anything to say at all depending on who is ultimately part of the team or leading the group. And given that vocal and reassuring intervention by the U.S. Federal Reserve has been the primary catalyst for rewarding not only “buy the dip” traders for stepping in but also longer-term investors for staying the course, risks are rising that this catalyst may be delayed or completely missing the next time the stock market starts moving steadily if not sharply to the downside.

What Can We Expect Going Forward?

The stock market will eventually correct once again. It will even fall into a new bear market at some point in the future, but this is a conversation for a later date. The question is exactly when will any such correction take place? Given that the stock market rallied so swiftly in the five weeks after Election Day based on expectations about fiscal policy changes that may ultimately prove wildly optimistic in terms of when these anticipated changes actually take place (if they end up changing at all), some have speculated that such a correction might get underway soon after Inauguration Day. Whether such predictions prove prescient or not remains to be seen.

But if such a correction were to take place sooner rather than later, it should be noted that the old sheriff in relatively dovish Janet Yellen is still in charge. And given that the market is currently anticipating between two to three rate hikes in 2017, she has the flexibility to talk these expectations down just as she did in 2016. Not only would such an outcome likely spark another “buy the dips” rally in stocks, but it would also put an upside tailwind into a bond market that struggled at the end of 2016 supposedly due to concerns about the Fed raising rates in 2017 (I would contend it had much more to do with the mass liquidation of Treasuries by a Chinese government trying to offset major capital outflows from the country, but even if this is the case, a Fed dialing back rate hike expectations is short-term to intermediate-term bullish for the bond market). Such a shift would also likely favor defensive stocks such as consumer staples and utilities over cyclicals such as industrials in the short term to intermediate term as well as gold.

Looking further ahead, the longer we continue into the future and the more the Federal Reserve becomes transformed, the less investors should be complacent in thinking that the next correction in stocks will be fleeting and should be bought. For if the Fed does become notably more hawkish as expected, it may increasingly be led by those who not only believe that managing the daily swings of the stock market should not be a concern of monetary policy, but may also think that taking some of the froth out of a stock market that is currently at historically high valuations in the midst of the second longest bull market in history despite an otherwise lousy economy throughout the post-crisis period might actually be a good and healthy thing.

During the post-crisis period, stock market corrections have proven fleeting and provided investors with outstanding buying opportunities. However, such “buy the dips” success may not continue into the future. For the primary catalyst for these rallies was the active vocal intervention by a U.S. Federal Reserve that placed propping up the stock market as a key policy priority. And while this stock market supportive group remains in charge of the Fed for now, it is likely that a new more hawkish group of policy makers will be increasingly taking control over the coming year that may care little for supporting the stock market any further than the Fed already has in recent years.

As a result, we continue to be wary of the next correction in stock prices. There may not be another snap-back rally right around the corner. While we still look to “buy the dips,” we’re going to be more cautious when doing it going forward given the new leadership.

We finally acclimated to the new Interactive Brokers platform and worked out a few kinks in the management platform in 2016 that will allow us to be very efficient in 2017. As noted above the market was quite irrational for most of the year and out of character so we remained on the cautious side. Going forward we are in a good position to take tactical moves as we see necessary to provide consistent returns while preserving capital throughout the year.

We also saw the fixed income market drop 5% in November, which was also out of character for a typically lower volatile asset class. We have allocated a 30% – 50% weighting in the portfolio as a core long term position but given the fixed income market has become more volatile and with interest rates potentially rising further through the year we have decided to apply a tactical approach to hedging risk to future drops in the fixed income market. This has proved to be very effective in our test models to neutralize risk on the positions held while still capturing yield.

The stock market had its post-election run but we are currently seeing the Dow, S&P 500 and the Russell indices starting to flatten and run out of steam. Even though the Dow has surpassed the 20,000 milestone the actual trend is somewhat flat as seen in the shaded area in the chart below. The Nasdaq has continued a slight uptrend and we are still holding our position, which retains a nice gain. 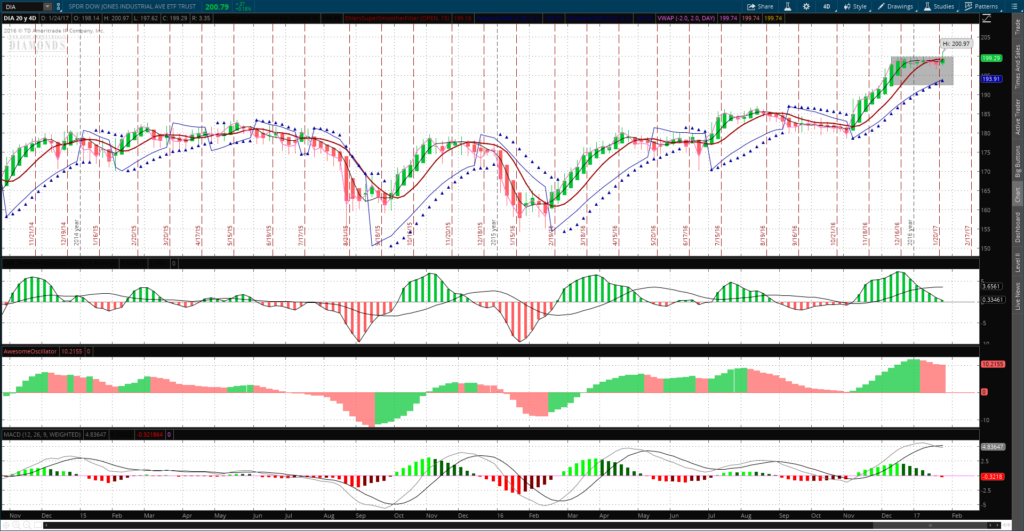 So in conclusion we are watching the equity markets closely to see if they break through into new ground or start breaking down through support levels, either direction we are ready. We will also be hedging price risk on the fixed income positions going forward to mitigate the effects of another drop in the bond market.

We look forward to a good year and will be sending you our next update in February.